Everything You Need to Know About Chiang Rai

Chiang Rai province is located in the northernmost of Thailand. It is a mountainous region with Rivers and jungles, so there is a lot of beautiful nature surrounding the area. The north of Chiang Rai borders Myanmar, the south borders Phayao Province, the east borders Laos, and the west borders Chiang Mai Province.

Chiang Rai population consists of people of various ethnic backgrounds, including those from hill tribes and Chinese lineage. This factors into Chiang Tai’s unique traditions and makes the city an excellent and different location for tourists to experience.

- The cool season is the perfect time to visit Chiang Rai because the weather will be incredible, and you will get a chance to enjoy beautiful views from the mountain tops.

- For the New Year Festival, the hill tribes will perform their cultural shows around the end of December. However, since it is a busy period, you should always book accommodations well in advance.

- Don’t forget to go Shopping at Mae Sai Market. And if you want to visit Tha Khee Lek Market in Myanmar, you should organize your visa ahead to save time.

- If you want to go Cruising along the Kok River, you should wear a long-sleeve shirt, a pair of shorts, sandals, and always bring a hat, sunscreen, sunglasses, snacks, and water. And for your own safety, don’t forget to wear a life jacket while aboard the Boat.

Chiang Rai has been inhabited since the 7th century, but it was not until 1262 that King Meng Rai established it as the first capital of the Lanna Kingdom. The capital was later relocated to Chiang Mai and since that time Chiang Rai has lived in the shadow of its neighboring province, though for tourists this is a good thing.

Today, Chiang Rai is a traveler’s paradise, endowed with abundant natural attractions and antiquities. Attractions range from ruins of ancient settlements and Buddhist shrines to magnificent mountain scenery and hill tribe Villages. For those interested in the natural side of Chiang Rai, jungle Trekking is a magical experience; explore the mountains of the north along various hiking trails, many of which access the villages of diverse hill tribal groups, many of whom maintain their traditional lifestyles.

Chiang Rai town, which tends to be a little more ‘laid back’ than its more popular neighbor, now competes with Chiang Mai as a Tourist Attraction and is fast becoming a popular escape for tourists wanting to leave their troubles behind.

Chiang Rai, the former capital of the great Lanna Kingdom, is a fascinating province filled with cultural and natural wonders, including the Golden Triangle where Thailand, Laos, and Burma come together; an area that was once the hub of opium production, a trade that had much influence on cultural practices and lifestyles. Chiang Rai had stayed off the tourist radar for many years, its people enjoying very leisurely development and mostly traditional, rural lifestyles. Until this day, entire clans live together in bamboo houses and each village has its own individual character.

Recently tourism has boomed in Chiang Rai, where visitors have come to explore the pristine natural beauty of the countryside and immerse themselves in the indigenous Culture, including those of a variety of different hill tribe communities. Fortunately for tourists, Chiang Rai is also a center for community development projects, helping rural villagers develop their attractions without adversely affecting their natural and cultural assets. 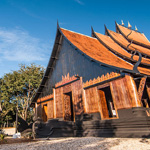 
Covering over 100 rai, it comprises more than 25 buildings of pure and applied northern architectural styles.


Doi Pha Tang, about 160 kilometres from the provincial town, is a viewing point on top of a high cliff over the Thai-Laotian border affording a delightful scene for the River and the Sea of mist throughout the year. 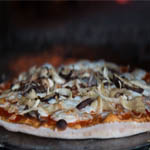 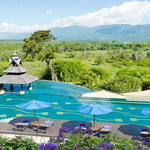