Everything You Need to Know About Nakhon Phanom

Nakhon Phanom province was once a glorious Kingdom in the past, so it has unique and interesting Cultures and traditions. It is also one of the pathways to Laos and getting well-known to tourists.

Nakhon Phanom, once the center of the ancient Sri Kotrabun Kingdom, lies along the western bank of the majestic Mekong River, although over the centuries it has moved back and forth across the river. The lovely setting of Nakhon Phanom town is enhanced by the rugged beauty of the jungle covered mountains that lie beyond the town of Thakaek on the Laotian side of the river. King Rama I chose the name Nakhon Phanom, city of mountains, because of the remarkable mountains found in the province.

Partly a result of its long History, Nakhon Phanom is a melting pot of diverse ethnic cultures and traditions, particularly represented by the Lao, who have lent a strong influence to the architecture, customs, and cuisine of Nakhon Phanom, including the Bai-Sri-Su-Kwan welcoming ceremony.

Covered with both high hills and low lying, forest covered plains, Nakhon Phanom is the site of Phra That Phanom, the most ancient and sacred religious Monument in Northeastern Thailand. Thais and Laotians are both common pilgrims to this highly venerated Buddhist shrine where they come to ask for blessings.

Throughout the history of Nakhon Phanom, Laotians and people from smaller ethnic minority groups migrated across the Mekong River giving modern Nakhon Phanom a distinctive cultural Fusion that is apparent in the local language, customs, and cuisine. Visitors can appreciate this culture during the Bai-Sri-Su-Kwan ceremony or by witnessing one of the region’s folk dances, such as the Sri Kotrabun, Fon Phu Thai, Sek-Ten-Sak, and So Tung Bung, some of which are only performed on special occasions.

In addition to its rich culture, Nakhon Phanom, which literally means “city of hills” is an area with great natural beauty and which features a number of opportunities for visitors to participate in outdoor activities, including Trekking in the national Park or shooting a round of golf. 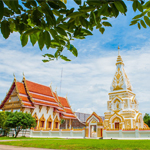 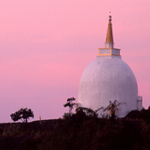